What are you looking for?

MILAN - Delivered on 6 June 2016, in the presence of the President of the Italian Republic Sergio MattarellaThe "MAM - Maestro d'Arte e Mestiere" awards, promoted by the Fondazione Cologni Mestieri d'Arte in collaboration with ALMA, the International School of Italian Cuisine.

An acknowledgement to the masters of art - "creators of Italian beauty" - who have distinguished themselves for excellence in various fields of artistic craftsmanship, ranging from ceramics to jewellery, to the stone and furnishings, from metals to mechanics to mosaics, from leather goods to art printing to restoration, from theatre crafts to textiles and last but not least food and wine. This first edition (the second one is scheduled for 2018) has awarded 75 professionals "who have distinguished themselves for particular professional merits and for the activity carried out in favour of the transmission of knowledge", selected by over 40 experts from the world of high craftsmanship and food and wine. Among the winners - here the complete list - – Gaspare Cusenza of CusenzaMarmi, the set designer Dante Ferretti, Eugenio Monti Colla of Atelier Colla in Milan, Piero Nason of NasonMoretti, the artist Gianluca Pacchioni, the illustrator Antonello Silverini, the costume designer Franca Squarciapino, and also the bartender Dom Costa, the chef Gualtiero Marchesi and master pastry chef Iginio Massari.

With the institution of this tribute to Masters who are often unknown to the public, but who make our country great, constituting one of its main riches, Italy fills the gap with nations like Japan and France, where the activity of these distinguished figures in the high craft trades has long been promoted and honoured by the highest institutional levels.

Precious sculptures, unique pieces that time cannot alter: in the fabulous world of Gaspare Cusenza, shines the dream of a life spent feeding the profession of his passion: Stone. Thousands of handcrafted creations in the luxury of an approach as whimsical as it is fascinating. And for "the craftsman" Gaspare today, the umpteenth recognition of excellence.

The "Fondazione Cologni dei Mestieri d'Arte" has included him among the 75 Italian masters of art, giving him the coveted MAM - Maestro d'Arte e Mestiere (Master of Art and Craft) award for distinguishing himself in his precious work. Gaspare Cusenza, for almost 50 years in his "Bottega Storica", as if it were the first day... 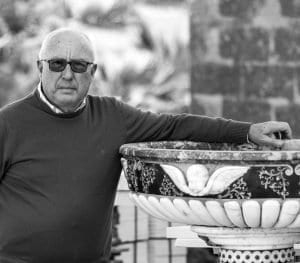 Gaspare Cusenza, together with Giacomo Alessi awarded for ceramics, are the only Sicilians to have received this prestigious and exclusive award, recognition for years of commitment, sacrifice and excellence in the world of high craftsmanship.

Born in Valderice (Trapani) in 1945, he started his activity in 1970 opening an artisan company for the artistic working of marble just in Valderice, in the area of Agro Ericino that for several centuries has seen in the extraction and working of marble one of the main economic resources of the area.

In 1990, after 20 years of experience in the field, he decided to give a turn to the activity and hired in his workshop the master Umberto Craparotta, a true artist in marble working and guardian of the ancient manual skills of the so-called "Trapanese stonecutters", now forgotten by the marble workers. In the mid-90s he specialized in the creation of so-called "copies of antiquity", i.e. works made in the style of the 17th, 18th and 19th centuries.
This interest led to the research and rediscovery of ancient techniques and materials that had fallen into disuse: he rediscovered jasper and ancient Sicilian yellow, the "incarnated" stone; he revisited and reworked Sicilian Baroque especially in the use of polychrome inlay in churches.
In the following years he hired young apprentices to pass on the techniques and secrets of marble working, convinced that the difference lies in the human value of being able to exploit new technologies to perfect his craftsmanship, with modern taste, while maintaining the centrality of the human hand.

MAM - Masters of Art and Craftsmanship

We use cookies on our website to give you the most relevant experience, remembering your preferences and repeat visits. By clicking "Accept", you consent to the use of ALL cookies.
Cookies SettingsI ACCEPT
Manage consent

This website uses cookies to improve your experience while you navigate through the website. Out of these, the cookies that are categorized as necessary are stored on your browser as they are essential for the working of basic functionalities of the website. We also use third-party cookies that help us analyze and understand how you use this website. These cookies will be stored in your browser only with your consent. You also have the option to opt-out of these cookies. But opting out of some of these cookies may affect your browsing experience.
Necessary Always enabled

Performance cookies are used to understand and analyze the key performance indexes of the website which helps in delivering a better user experience for the visitors.

Analytical cookies are used to understand how visitors interact with the website. These cookies help provide information on metrics such as the number of visitors, bounce rate, traffic source, etc.

Advertisement cookies are used to provide visitors with relevant ads and marketing campaigns. These cookies track visitors across websites and collect information to provide customized ads.

Other uncategorized cookies are those that are being analyzed and have not been classified into a category as yet.

ACCEPT AND SAVE
Powered by